Why Not Everything Should Be An App 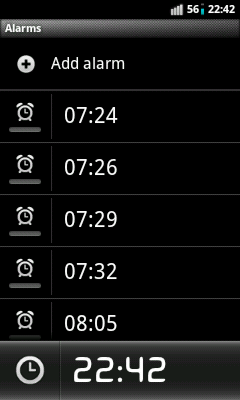 Long before smartphones became popular, my cell phone has always been furfilling one important function: waking me up in the morning. Some phones handled this tasks better than the others, but they were all invariably infallible. The Nokia 6600 treated the alarm clock task especially seriously: if the alarm was set, it would go off, no matter what. If the phone was switched off, it would turn itself on and boot up just to play the alarm tune. After the alarm was dismissed, the phone would promptly switch itself off again.

The first phone to fail the alarm clock task was surprisingly a smartphone: the Android-powered Samsung Galaxy 3. I would set the alarm, and it would simply fail to go off in the morning. What made the issue even more baffling was that my sister had exactly the same model, and she reported no problems with the alarm clock at all. Mine was behaving oddly: sometimes the alarm would work, other times it would fail, seemingly at random. Eventually I figured out that the alarm had the best chance of working if I reset it every evening.

As I found out later, the problem had been related to the way memory management is handled in Android. If the device runs out of free memory, the system lists all the running Apps, and decides which one of them should be terminated to reclaim its memory. It would not be a problem, if it wasn't for a little fact: the alarm clock IS an App. Each time the phone runs out of memory, there is a small chance that the system will stop the alarm clock. Once stopped, the alarm clock will always fail to go off until the user re-runs the application by opening the alarm clock settings. My sister did not use as many memory-intensive applications as I did, and that is why she has never encountered this problem.

With the older phones, the alarm clock has always been a part of the operating system. Other than ensuring faultlessness of the alarm functionality, it has also made it possible to have impressive extra functionality, like the Nokia's boot-up-to-play-the-alarm thing.

Unfortunately, ever since the smartphone revolution, everything just has to be an App, and as this example shows, it's not always a good thing.

The following comments are owned by their respective authors. Unfailed.pl is not responsible for them in any way.